Poppy is bound for Paris, the City of Love. Could this be her chance to end her epic dry spell?

Lily is en route to her cousin’s wedding in LA, where she’s willing to break a few rules to land her dream role.

Maggie can’t wait for her romantic ski holiday in Meribel – until it goes seriously off-piste.

Rachel packs for a glamorous Roman holiday, but a blast from the past is about to sabotage la dolce vita.

The girls get together and fly to Manhattan. But someone’s been hiding a big secret in the Big Apple…

Hilarious, romantic and unputdownable, Girls on Tour is an irresistible series of interlinked stories about four ordinary girls who have extraordinary fun in faraway places. Follow them in an unforgettable year that includes breaking up, making up, new jobs and some big surprises …

Perfect for fans of Lindsey Kelk’s I Heart … novels. Previously published as five e-novellas, now in one volume with fabulous brand new material.

The final part in what has been an absolutely cracking series Girls on Tour reunites Poppy, Lily, Maggie and Rachel as the girls get together in New York to attend an exclusive event hosted by Lily. However, all is not what it seems.

I have loved this series. Each protagonist has made me laugh, yell at my kindle in frustration and also fall in love with them, their lifestyle and their total moxie. I must admit that I am sad to see it all end.

What is great about this collection of shorts is that Doherty has added linking chapters between each chapter and a whole new short story too. That is a lot of bang for your buck.

I think for me personally, the reason why I enjoyed this series so much is that I saw a little of myself in each of the characters; I also saw elements of their collective personalities that I wish I had. Besides all of this Nicola Doherty has made me realise the importance of adventure and also made me cherish and value the small events that shape our everyday.

If you have not read the Girls on Tour series then I implore you to buy this book. It is a wonderful sassy romp worthy of you spending your hard earned moolah on.

Girls on Tour by Nicola Doherty is available now.

Read on to see my reviews of the previous four books in this series. 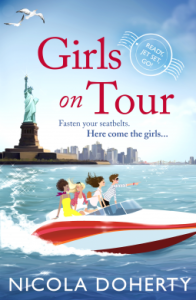 Poppy Does Paris, the first instalment in the Girls on Tour series was pretty much the ideal short story for me. I combined two of my favourite things; the world of publishing and the beautiful city of Paris.

What I loved about this short story is that the characters seemed fully developed. They didn’t appear as just brief snapshots. The story didn’t feel like scenes placed together, producing a domino effect. I was able to be charmed, amused and feel for the Poppy and romantic lead, Charlie.

Poppy’s mistakes felt like they could have been made by anyone. You genuinely wanted her not to screw up and felt the embarrassment – nay mortification – when she did. She was such a likable protagonist. Nicola Doherty has managed to create a character who I wanted to be – flaws and foibles included. 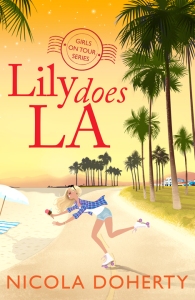 I loved the first part of the Girls on Tour series – Poppy Does Paris. I did find Lily Does LAa little bit harder to get into.

Initially, I found Lily a little bit petulant. She was selfish and attracted the wrong kind of drama. I have to admit, she was really hard to like. Unlike Poppy – who seemed to make genuine mistakes, Lily caused her own drama and then didn’t really take responsibility for her actions.

However, once Lily had her life epiphany and had a complete character arc reveal she became quite likable, to the point that I am looking forward to reading more about her in the rest of the series.

So whilst I would say that Poppy Does Paris is more enjoyable do not give up Lily Does LA. Lily does become more likable and her story was actually very enjoyable.

Maggie Does Meribel has been my favourite of the Girls on Tour series of books. What Nicola Doherty has managed to do (and do very well) is create a realistic story about the pitfalls of any relationship. The way she describes Maggie’s insecurity about rocking the boat when it is damn obvious that Leo is being horrible to her is such an honest account. Haven’t we all felt like that sometimes?

This was especially clever by being juxtaposed with the two other relationships within the story. They showed us, the reader, and Maggie exactly what she was missing.

I think Nicola Doherty has created such a wonderful series of books and each one has its own merits. With Maggie Does Meribel it is the anti-love story that makes it so special. Another massive well done to Nicola Doherty.

I have loved the Girls on Tour series and in my opinion they just keep getting better and better. Rachel Does Rome does not disappoint!

In this fourth instalment we see some of our favourite characters reunite for a girly holiday in Rome to save themselves from the Valentine blues. However, it seems like our protagonist Rachel has to deal with her past before she can move on.

In what I like to describe as the Sex and the City of short stories, Rachel Does Romefocuses more on friendship and independence than the other stories in this series. It is good to read a story about strong social groups – friendships over male/female relationships – it helps to remind you to keep your girls close because they are always there for you to fall back on.

Another triumph from Nicola Doherty!