Delia Moss has made a decision. It is the 21st century and she wants the world to know how much she is in love with her boyfriend of ten years, Paul. She plans to propose to him. However, as with all best laid plans things start to go a bit awry. Especially only moments after accepting her proposal, Paul incorrectly texts Delia a message intended for his mistress.

Heartbroken, Delia flees to London – away from the life that she knew, a life she was comfortable with and a life that she really wanted. However, London has a few tricks up its patriotic sleeves to help Delia realise that she is better, stronger and wiser than her northern upbringing initially reveal.

It is silly just how much I loved this book. Within the first few pages I was hooked. I was blindsided by just how much emotion I was feeling towards Delia’s situation. I mean, it could be argued that the protagonist wronged by her partner is a storyline done to death but Mhairi McFarlane had me wheezing with panic over the happenings of Delia’s love life. Suffice to say, the whole cheating scandal is probable every hopeless romantic’s worst nightmare and imagining myself in Delia’s situation was utterly heartbreaking even though it was through the vicarious activity of reading rather than facing it myself.

What McFarlane manages to do though is offer light at the end of this dark and melancholy tunnel. She shows us how strong a character can be, in fact how strong we can be in that self same situation. Furthermore, what is most noteworthy about this author is that she takes risks. She won’t go for the easy option or the one that her readers will agree with and plenty of times throughout this story I did yell at the book. However, it is an impressive thing when an author will monkey with your mind for the purpose of the better outcome. For this, I salute Mhairi McFarlane.

It’s Not Me, It’s You is a juggernaut of a chick-lit with so many emotions, so many adventures and so many possible outcomes it will keep you guessing until the very end. This should be on every readers Christmas Wish List…heck forget Christmas, buy it now and just hide for the weekend and read it all.

It’s Not Me, It’s You by Mhairi McFarlane is available now. 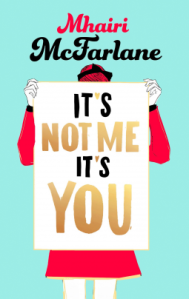 When Sybil is invited by her friend Cher to spend a few days in Tindale, a tiny village where Cher and her partner Clive run the local pub, Sybil jumps at the chance. Lately, all Sybil has done is mope about how tragic her life is; her fiancé ran out on her – on their wedding day no less, and to make it worse he ran off with her identical twin sister; the mounting debt from the wedding that never was is still having to be dealt with and to top it all off Sybil seriously believes that she has made a giant cock-up at work which will cost the great British taxpayer £42,000 – whoopsie.

Yes the best thing for Sybil is to get away from it all. However, what Sybil soon realises is that country life is a lot more complex than the anonymity that London affords. Sybil is quickly immersed in the ways of the close knit community and soon has to deal with the fact that everybody – absolutely everybody has their own demons to deal with.

Having previously read books by Alexandra Brown I was immediately put at ease because I knew I was in for a treat. Brown always manages to find the heart of the story an make you fall in love – not only with the characters but with their stories, their problems and their sheer will power. My favourite thing about Brown’s writing is her ability to make me fall in love with her settings. I am not one for the quiet country life and will always be a city girl but I could imagine myself living in the sleepy town of Tindale and – shock horror – being happy there. Kudos to you,  Alexandra Brown.

Another thing that I really enjoy about Brown’s writing – and something that she has expressed especially well in The Great Christmas Knit Off – is how she captures real life problems. She doesn’t overwhelm you with sadness and heartbreak but she reveals the inner strength of her characters and it becomes inspiring. The way the community rallied around Hettie in her hour of need shows the warmth and generosity of people which we sometimes forget about. She also manages to have inherently flawed characters that remain likeable. You could argue that Sybil has a classic case of avoidance about her own problems yet even though she buries her head in the sand she still has the time and good grace to help others in need.

It is these key features that are at the heart of Alexandra Brown’s novels and it is also why I absolutely love picking them up to read.

The Great Christmas Knit Off by Alexandra Brown is available November 6th, 2014.